The store will not work correctly in the case when cookies are disabled.
Gourmet Dinner Service 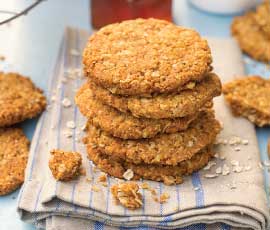 Today, Anzac biscuits are manufactured commercially and widely available. But we think it’s a shame to buy them when you can so easily create your own superior home-baked version.

There’s nothing like the aroma of baked oats and golden syrup, mmmm… deee…licious!

Anzac biscuits have long been associated with the Australian and New Zealand Army Corps (ANZAC) which was established in World War I.

The biscuits were initially known as ‘soldier biscuits’ and were sold at fetes and public events to raise money to support the war effort. Later they were included in parcels that loved ones and charities sent to the troops, as the biscuits tended to last well.

Interestingly, Anzac biscuits do not contain eggs. Not only were eggs scarce during the war but their inclusion would cause the biscuits to spoil during their long voyage abroad.  Instead, the golden syrup binds the ingredients together.

No discussion about Anzac biscuits would be complete without the mention of whether they should be crunchy or chewy, and this question has sparked plenty of debate for over a century! Whatever your preference, this Anzac biscuit recipe is guaranteed to please - just one simple substitute (white versus brown sugar) can produce either chewy Anzac biscuits or the crispy type.